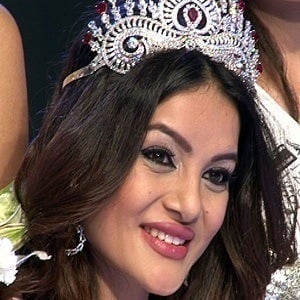 Actress and beauty queen who made her big screen debut playing Sujata Shakya in the 2016 drama Gajalu. She previously represented her home country of Nepal in the Miss World 2012 pageant, where she took home the Public Choice Award.

She was raised in the Chitwan District of Nepal.

She became the first Nepalese contestant ever to reach the quarterfinals of the Miss World pageant.

She has dated actor Saugat Malla.

She was cast alongside actor Anmol K.C. in Gajalu.

Shristi Shrestha Is A Member Of