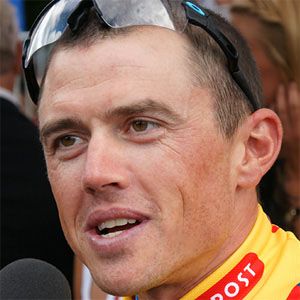 Australian cyclist best known for becoming the first man to win the Tour Down Under three times. He also won the Australian National Road Race in 2012 and 2014.

He was raised in Mansfield and received the Australian Institute of Sport Scholarship.

He required surgery after breaking his collarbone during a nasty fall at the GP d'Ouverture la Marseillaise in 2006.

He married a woman named Rhana.

He and Spanish cyclist Luis Sanchez are both winners of the Tour Down Under race.

Simon Gerrans Is A Member Of