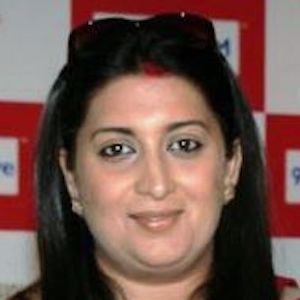 Indian politician, and former model, television actress and producer. She is the current Textiles Minister in the Government of India.

In 2000, she made her acting début with TV series Aatish and Hum Hain Kal Aaj Aur Kal and both aired on Star Plus.

She began her political career in 2003 after joining the Bharatiya Janata Party.

In 2001, Smriti married Zubin Irani and they've had a son and a daughter.

Varun Gandhi and Kirti Azad are also members of the Bharatiya Janata Party.

Smriti Irani Is A Member Of