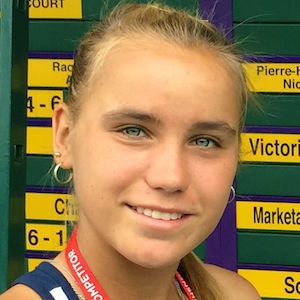 Tennis player who represented Team USA at the 2014 Summer Youth Olympics. She was the number one ranked girl in the 18's division and the number nine junior in the world in 2015. She won two pro titles by the age of 18. In 2020, she became the winner at the Australian Open.

She has had her own website dedicated to her tennis journey since the age of 5.

She earned a Wild Card into the 2015 US Open women's singles tournament and made it all the way to the finals.

She was born in Moscow, Russia, but has lived in Florida.

She and Rebeka Masarova both competed at the Wimbledon Junior in 2016.

Sofia Kenin Is A Member Of