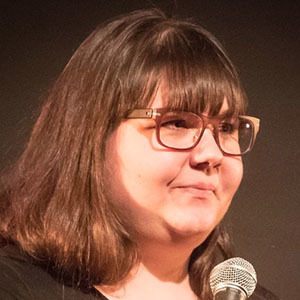 Danish comedian who is known for having toured for her comedy shows and hosts a wide range of podcasts including Comedians Telling Stuff, The Guilty Feminist, and the Secret Dinosaur Cult podcast. She is also known for her support of the fat acceptance movement and was able to get Cancer Research UK to pull their campaign naming obesity as the second most common cause of cancer.

She moved to London in September of 2012 and started performing comedy regularly. She was identified as One to Watch in 2013 by Time Out Magazine. That same year she started her Comedians Telling Stuff podcast. She created an hour long debut set in August of 2015 and in 2016 started working as an actress, starring on the Channel 4 series Outsiders.

She is known for having won the Fosters' Best Newcomer Award in 2015 and the Laughing Horse New Act of the Year award in 2013.

She was born in Denmark but later moved to London.

She has interviewed several celebrity guests on her Comedians Telling Stuff podcast including Susan Calman, Nick Helm, and Richard Herring.

Sofie Hagen Is A Member Of