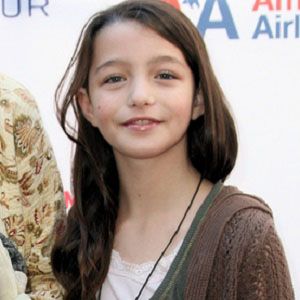 Notable for her child acting roles in the films Margot at the Wedding (2007), Mammoth (2009), and An Invisible Sign (2010), she also appeared in an episode of Law & Order and in short films titled Born Again and Mistakes Were Made.

She made her cinematic debut in the 2006 Alejandro Monteverde-directed movie Bella.

In Mammoth, she plays the child of the characters portrayed by Gael García Bernal and Michelle Williams.

The daughter of Shelly Gibson and Jeff Nyweide, she grew up in Manchester, Vermont.

She was cast alongside Vanessa Williams in the 2007 movie And Then Came Love.

Sophie Nyweide Is A Member Of