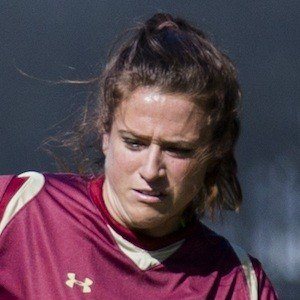 Forward who became a member of the senior United States women's national soccer team in 2015. She has been a standout player in the National Women's Soccer League with the Boston Breakers and Chicago Red Stars.

She grew up in Winchester, Massachusetts and attended Buckingham Browne & Nichols. She played for the Boston College Eagles from 2011 to 2014.

She was named to the All-ACC Academic Team and received the Athletic Director's Award for Academic Achievement during her time at Boston College.

She is the daughter of former basketball player Jim McCaffrey. Her brothers James and Mike were both college football players.

She has been teammates with midfielder Danielle Colaprico on the Chicago Red Stars.

Stephanie McCaffrey Is A Member Of