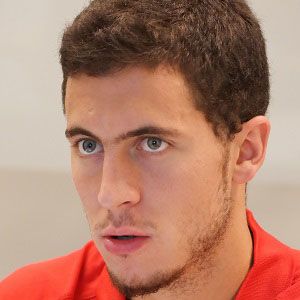 Belgian winger who joined Chelsea in 2012. A year earlier, he became the youngest player ever to win the UNFP Ligue 1 Player of the Year award as a member of France's Lille OSC. He debuted with Belgium's national team in 2008 and later became their captain. In 2019, he'd sign with Real Madrid.

He began his youth career with Royal Stade Brainois when he was four years old.

He helped Chelsea win the League Cup and Premier League, nabbing the title of FWA Footballer of the Year and PFA Players' Player of the Year.

He married Natacha Hazard in 2012. They have sons named Yannis, Leo and Samy. He also has a brother named Ethan.

He became teammates with Frank Lampard on Chelsea in 2012.

Eden Hazard Is A Member Of