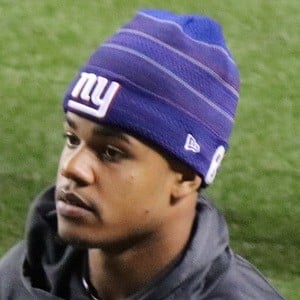 2nd round selection by the New York Giants drafted to be part of a dynamic duo for the Giants alongside star wide out Odell Beckham, Jr.

He played football, basketball and ran track in high school. He was selected to be a part of the Under Armour All-American Game.

He played college ball for the University of Oklahoma. He finished his collegiate career with 233 receptions, close to 3,500 yards and 26 touchdowns.

His late father Derrick Shepard also played in the NFL from 1987 to 1991. He passed away when Sterling was six years old. He got engaged to model Chanel Iman in December of 2017 and they married the following year in March. In August 2018, they welcomed a daughter named Cali together. Their second daughter, Cassie Snow, was born in December 2019.

He caught passes from Eli Manning to begin his NFL career.

Sterling Shepard Is A Member Of