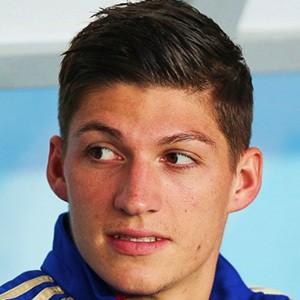 Midfielder who has gained prominence for his play for clubs in different European pro leagues, including for VfB Stuttgart of the German 2. Bundesliga in 2019. He previously played for CSKA Moscow of the Russian Premier League in 2013-2014, and won the league title with the squad in 2014.

He made his professional soccer debut in 2008 for Swiss Super League club Grasshopper. He would later win the Swiss Cup with the club in 2012.

He won back-to-back Russian Super Cup titles with CSKA Moscow in 2013-2014. He made the final 23 man roster for the Swiss national team competing at the 2018 FIFA World Cup.

He has five siblings. He married his long-time girlfriend Mirjana in May 2015.

He and Mario Gomez have played as teammates for VfB Stuttgart.

Steven Zuber Is A Member Of