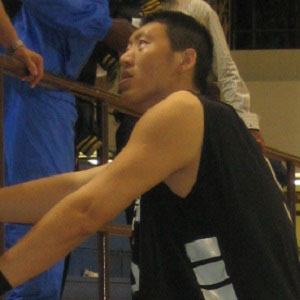 Chinese center standing at 7'9" who won the Chinese Basketball Association Finals with the Beijing Ducks in 2012 and 2014. His staggering size has earned him appearances on American television shows like Jimmy Kimmel Live! and Anatomy of a Giant.

He grew up in Bayan County, Harbin and began playing basketball when he was 15 years old. He moved to the United States in 2005 to pursue a career in the NBA but was unable to secure a roster spot.

He appeared in a fight scene with Jackie Chan and Chris Tucker in the 2007 action comedy Rush Hour 3.

He married Xu Yan in 2013. He has one brother and one sister.

He was teammates with fellow 7-footer Gheorghe Muresan on the CBA's Hamamatsu Phoenix.

Sun Mingming Is A Member Of