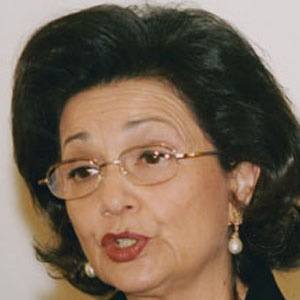 Wife of former Egyptian President Hosni Mubarak who was the First Lady of Egypt for twenty years. She also served as Goodwill Ambassador of the United Nations Food and Agriculture Organization.

She met Hosni Mubarak when she was sixteen and married him a year later.

She was a well-known philanthropist and activist for children's issues in Egypt.

She had two children with Hosni Mubarak.

She attended the American University in Cairo, just like the NBA great Steve Kerr.

Suzanne Mubarak Is A Member Of