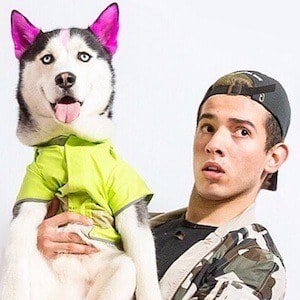 TikTok star who posts videos with his husky Swaggy Wolfdog for more than 5 million fans on the app. He frequently dresses his dog in different costumes, including having his husky wear glasses.

He joined TikTok back when it was called musical.ly. For his first ever video on the platform, he used the Justin Bieber song "What Do You Mean?" Before Swaggy came around, he was just filming videos for friends.

His social media stardom carries over to Instagram, where he and his dog have accrued over 1.2 million followers. He has a group called Swaggy Squad, which a lot of young kids are a part of.

He is from California and has a younger brother.

He was roommates with Julius Dein and Kayden Stephenson. He has done collaborations with Lauren Godwin and Jake Paul.

Swagrman Is A Member Of