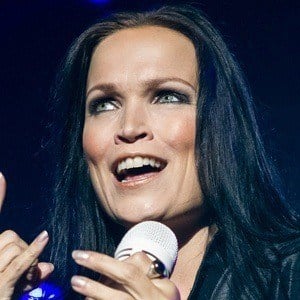 Former frontwoman of the Finnish symphonic metal band Nightwish who was fired from her own band and went on to pursue a solo career.

She was bullied at school by girls envious of her voice; she sought refuge in singing and, supplemented by formal training, developed a strong vocal style.

After personalities in the band clashed, she was forced out of Nightwish in a drama closely followed by the media. In 2005 started an award-winning solo career.

She married Marcelo Cabuli, an Argentine businessman who became her manager. Together they have a daughter named Naomi Eerika Alexia.

Nightwish fans have been bitterly divided over whether she or Anette Olzon, her replacement, was a better singer.

Tarja Turunen Is A Member Of