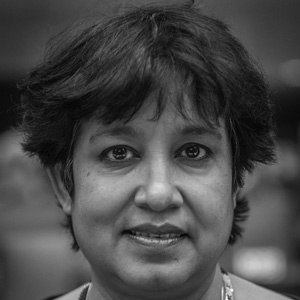 Author and former physician who published the 1993 novel Lajja about a Hindu family fighting against Muslims. She fled Bangladesh in 1994 when extremists threatened to kill her for the book and her other feminist teachings.

She studied medicine at the Mymensingh Medical College and graduated in 1984. She became a gynecologist, then anesthesiologist.

She was later banned from India in 2008 for her same feminist teachings.

She was born in the town of Mymensingh to her Muslim parents Dr. Rajab Ali and Edul Ar.

She cites Virginia Woolf as a strong influence on her work.

Taslima Nasrin Is A Member Of