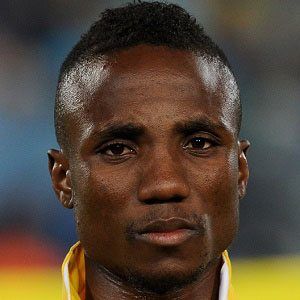 South African midfielder who became a star while playing for clubs like the Orlando Pirates and Mamelodi Sundowns, winning the PSL Footballer of the Year award two straight years in 2008 and 2009. He won the 2007 COSAFA Cup as a member of the South African national team and was named the Player of the Tournament.

He was born in Meadowlands, a suburb of Johannesburg. He played youth soccer for Coventry, the City Rebels and the Ria Stars.

He was raised primarily by his mother, He has one brother and one sister.

He was teammates with fellow South African midfielder Siphiwe Tshabalala at the 2010 FIFA World Cup.

Teko Modise Is A Member Of