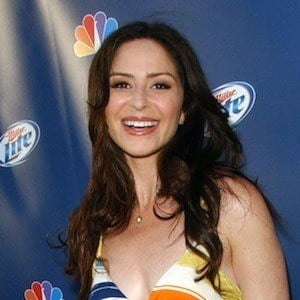 American writer and television personality who is best known for hosting the first season of the home makeover show While You Were Out on the channel TLC. She is also known for being a co-host on The Adam Carolla Show.

She started her career by studying journalism at New York University. She then began writing for Win Ben Stein's Money in 1997, where she won a Daytime Emmy Award. She also had several small film roles and writing jobs, including a writing credit for Who Wants to Be a Millionaire.

She has won several Emmy Awards and received several nominations. She is known for winning the 2015 award of Best Host for the show "The List".

She was born and raised in Panorama City, California. In 2008, she married Daniel Wachinski.

She stars alongside Adam Carolla on his self-titled show which appears on KLSX.

Teresa Strasser Is A Member Of