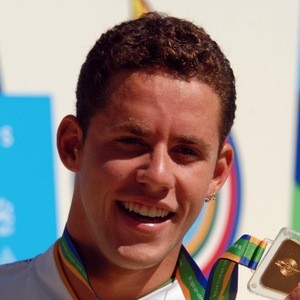 Brazilian international swimmer who is known for competing in medley and freestyle events. He is known for his work with Brazil's national team and for winning the silver medal in the 400-meter individual medley event at the 2012 Summer Olympics.

He first began swimming at the age of two. At 12, he won his first medal at a competition in Volta Redonda, Brazil. He then joined Belo Horizonte's Minas Tenis Clube in 2001 where he began training among the top Brazilian swimmers. He made his Olympic swimming debut in 2004.

He has won several awards and honors for his swimming career including World Male Swimmer of the Year by Swimming World Magazine in 2007.

He was born and raised in Rio de Janeiro, Brazil. In early 2013, he married lawyer Gabi Pauletti.

In the 400-meter individual medley at the 2012 Summer Olympics, he beat out then-current Olympic champion Michael Phelps.

Thiago Pereira Is A Member Of