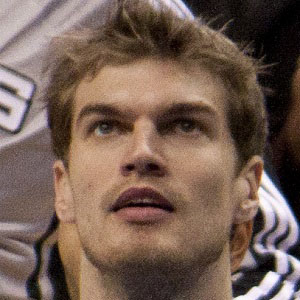 Brazilian power forward/center who broke into the NBA with the San Antonio Spurs in 2010 and helped the team win the NBA Championship in 2014. He was traded to the Atlanta Hawks in 2015.

He began his professional career in 1999 at the age of 14 with the Brazilian team Ipiranga.

He married Amaia Amescua in 2010 and in 2012, the couple had their first child, a son named Benjamin.

In 2010, he began playing for the San Antonio Spurs beside Star power forward Tim Duncan.

Tiago Splitter Is A Member Of