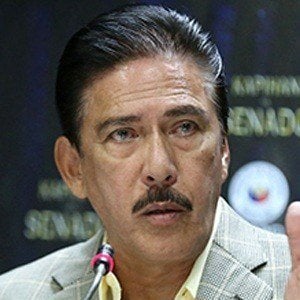 Versatile Filipino man whose occupations have ranged from singer to TV host to politician. He has served as Quezon City's vice mayor, a senator, and as a long time host of Eat Bulaga.

As an entertainer early in his career, he was a member of the group VST & Company. He also had early hosting duties on GMA Network shows Discorama and Student Canteen.

He served on the Board of Directors and as Chairman for Dangerous Drugs Board in 2008.

He has four children named Romina, Diorella, Gian, and Ciara with his wife Helen Gamboa.

He was accused of plagiarizing Robert F. Kennedy's Day of Affirmation Speech by Kerry Kennedy, the daughter of Robert F.

Tito Sotto Is A Member Of