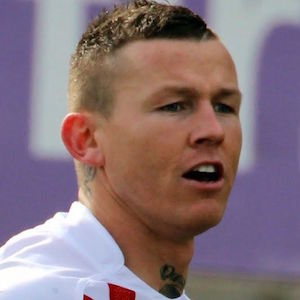 Rugby league five-eight, fullback, and halfback whose promising National Rugby League career has been marred by various off-field and drinking-related instances. After his contract was terminated by Cronulla in 2014, he moved to France to play in the Super League.

He joined the Canberra youth team when he was 12. He made his senior debut at the age of 17 and was named the team's Rookie of the Year.

He's made a handful of appearances with New South Wales and even earned a cap in 2010 with the Australian national team, but his off-field behavior has limited his opportunities. He's known for his goal-kicking proficiency.

He was born to Leanne and Daryl Carney and has two sisters, Krysten and Melinda.

He and Willie Mason became teammates when he joined Catalans of the Super League.

Todd Carney Is A Member Of