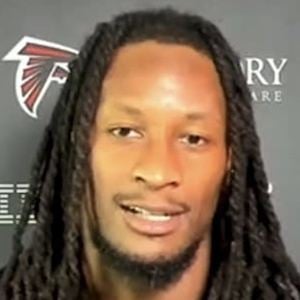 Running back who was selected tenth overall in the 2015 NFL Draft by the the St. Louis Rams, who went on to become the Los Angeles Rams. He led the NFL in rushing touchdowns in 2017 and 2018 and helped the Rams reach Super Bowl LIII in 2018-19.

He played football at Tarboro High School in North Carolina, rushing for 2,600 yards and 38 touchdowns his senior year.

He was a second-team All-SEC selection and Freshman All-American in his first college year at the University of Georgia. He ran track and field at Georgia as well, specializing in the 60, 100, and 110 meter hurdles. He was named Offensive Rookie of the year after the 2015 NFL season.

He was named after his father, Todd Gerome Gurley. He has four siblings.

He became the first true freshman at Georgia to rush for more than 1,000 yards since the great Herschel Walker in 1980.

Todd Gurley Is A Member Of