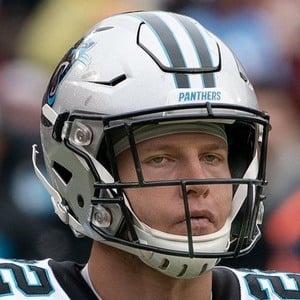 Running back and return specialist who was selected 8th overall in the 2017 NFL Draft by the Carolina Panthers. He was named AP College Football Player of the Year in 2015 during his time with the Stanford Cardinals.

He previously was the Stanford Cardinals star running back and kick/punt returner. He set the NCAA record for all-purpose yards with 3,864 in 2015.

He played running back, wide receiver, cornerback and punter at Colorado High School, where he earned 2012 and 2013 Gatorade Football Player of the Year.  He was traded to the San Francisco 49ers in 2022.

He is the son of former Cardinal and NFL player Ed McCaffrey. He had an uncle Billy who played college basketball at Duke and a grandfather Dave Sime who was an Olympic track star. His mom's name is Lisa. He has three brothers, Dylan, Luke and Max. He began a relationship with Olivia Culpo in 2020.

He finished just behind Derrick Henry in the 2015 Heisman Trophy running.

Christian McCaffrey Is A Member Of