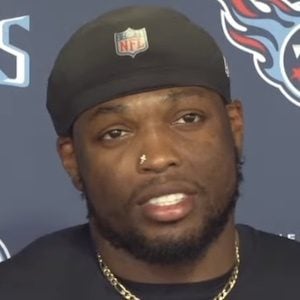 Running back who won the 2015 Heisman Trophy as a member of the University of Alabama Crimson Tide. He was drafted in the second round of the 2016 NFL Draft by the Tennessee Titans and soon became one of the NFL's top rushers. He was named the 2020 NFL Offensive Player of the Year after becoming the eight player in NFL history to rush for over 2,000 yards in a single season.

He was a football, basketball and track star at Yulee High School in his hometown of Yulee, Florida.

He rushed for a national-record 12,124 career rushing yards during his high school career and was named the 2012 Columbus Touchdown Club National High School Player of the Year. He won the 2016 NCAA National Championship at Alabama.

He was born to Derrick Henry, Sr. and Stacy Veal. His parents were teenagers when he was born and he was raised largely by his grandmother.

In his last game with the Crimson Tide, he set the school record for career rushing yards, previously held by Shaun Alexander.

Derrick Henry Is A Member Of