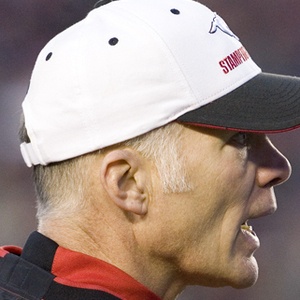 Football coach who was hired as the head coach of the CFL's Montreal Alouettes in 2014. He previously won a CIS title as an assistant coach at the University of Calgary and won his first Grey Cup as a CFL head coach with the Edmonton Eskimos.

He was an All-American linebacker and wrestler at North Carolina State University. As a pro, he played in the CFL for the Calgary Stampeders and Saskatchewan Roughriders and spent one season in the NFL with the Buffalo Bills.

He took a break from coaching from 2008 to 2013, during which time he served as the CFL's Head of Officiating.

He has been married and has children named Thomas, Holly and Hilary. His father is former Philadelphia Eagles tackle Tom Higgins, Sr.

Tom Higgins Is A Member Of