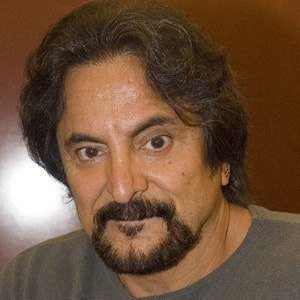 A skilled cinematic makeup artist, actor, stuntman, and director, he is perhaps most well known for his special effects makeup work for Friday the 13th Parts I and IV, as well as for such George A Romero-directed features as Creepshow and Dawn of the Dead.

After studying at Point Park University for several years, he joined the United States Army and served as a Vietnam War combat photographer. After returning to the United States, he studied acting and directing at Carnegie-Mellon University.

As a director, he worked on the early 1990s remake of Night of the Living Dead, and as an actor and stuntman, he appeared in films such as Django Unchained (2012) and Monkey Shines (1988). He penned the prosthetic makeup-themed books Grande Illusions I and II.

A member of an Italian Catholic family, he spent his youth in Pittsburgh, Pennsylvania.

Appearing with John Leguizamo, Simon Baker, and Dennis Hopper, he played the "Machete Zombie" in the 2005 horror movie Land of the Dead.

From Dusk Till Dawn
Dawn of the Dead
Machete Kills
More