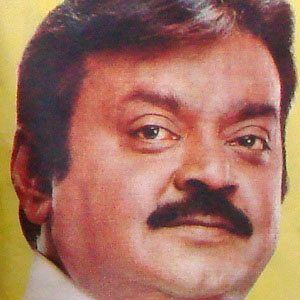 Notable as both a politician and an actor, he received a 2009 Filmfare Top 10 Legends of Tamil Cinema Award, as well as one Filmfare and two Cinema Express Best Actor Awards over the course of his three-decade career as a screen star.

The film that launched his acting career was the 1981 feature Sattam Oru Iruttarai.

He founded a Tamil regional political party called the Desiya Murpokku Dravida Kazhagam and took office in 2011 as the Tamil Nadu Legislative Assembly's Leader of the Opposition.

Born Vijayaraj Alagarswami Naidu, he grew up in India's Tamil Nadu state. His marriage to Premalatha resulted in sons named Vijay and Shanmuga.

He co-starred with Ramya Krishnan in the 1991 Tamil action movie Captain Prabhakaran.

Vijayakanth Is A Member Of