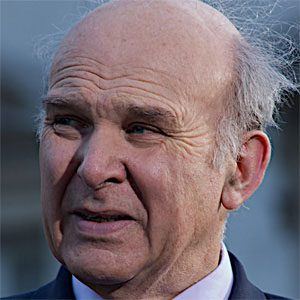 Member of Parliament for the British Liberal Democratic Party. He began his first parliamentary term in 1997 and was later appointed his party's Deputy Leader and Treasury Spokesperson.

He studied economics and natural sciences at Fitzwilliam College, Cambridge and became President of the Cambridge Union in 1965. He went on to earn his PhD in economics from the University of Glasgow.

He published a number of economic texts, including a 2008 work titled The Storm: The World Economic Crisis and What it Means.

He was married to Olympia Rebelo, the mother of his three children, from 1968 until her death in 2001. He later married Rachel Smith.

Partnered with ballroom dancer Erin Boag, he appeared on the 2010 Christmas edition of Strictly Come Dancing.

Vince Cable Is A Member Of