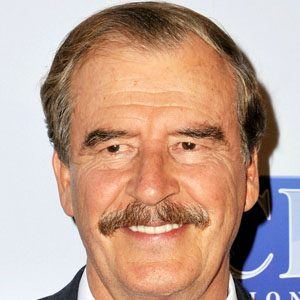 President of Mexico who served from 2000 to 2006 and was the first president elected from an opposition party since Francisco I. Madero in 1910. He is widely recognized for his cowboy style of boots and jeans.

He started off as a Coca Cola truck driver and moved all the way up to supervisor of Coca Cola operations in Latin America.

In his autobiography, Revolution of Hope: The Life, Faith and Dreams of a Mexican President, he called President George W. Bush the cockiest guy he had ever met.

He divorced Lilian de la Concha in 1990 after 20 years of marriage.

He received a call of congratulations from Bill Clinton after being elected President of Mexico.

Vicente Fox Is A Member Of