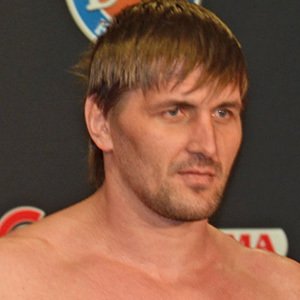 Russian heavyweight who gained fame for competing in the Bellator promotion. He won the Bellator Heavyweight World Championship in November 2013 and successfully defended the title in April 2014 before signing with Fight Nights Global.

He rose to prominence as a prolific Sambo competitor representing Russia at the international level. He won his fourth Sambo World Championship title in 2011.

He won his first 21 professional MMA bouts. He was named Global-MMA's Fighter of the Year in 2013.

His father's name is Viktor.

He successfully defended his Bellator World Heavyweight Championship belt against Cheick Kongo at Bellator 115 in 2014.

Vitaly Minakov Is A Member Of