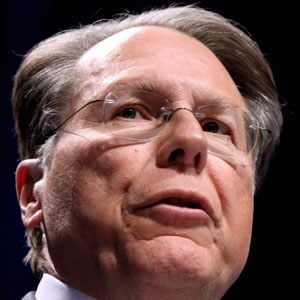 Head of the National Rifle Association who famously urged for an expansion of gun ownership after the Sandy Hook Elementary school shootings. His first book, Guns, Crime, and Freedom, was published in 1994.

He joined the NRA, the nation's largest gun rights organization, in 1971, taking the EVP post in 1991 and campaigning against politicians thought to be in favor of gun control.

He mentioned in statements and interviews he was in favor of having more armed guards at school, saying the only thing that could stop a bad guy with a gun was a good guy with a gun.

He was born in New York and grew up in Roroanoke, Virginia.

He wrote several books during his tenure with the NRA, including a 2011 title which claimed Barack Obama was set on destroying the Second Amendment.

Wayne LaPierre Is A Member Of