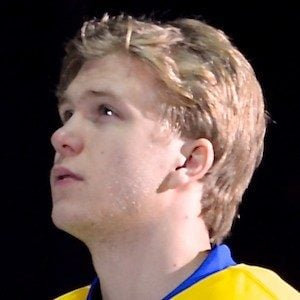 Hockey forward who was drafted by the Anaheim Ducks in 2011 and has gone on to play for teams like the Columbus Blue Jackets and Vegas Golden Knights. He won the gold medal representing his native Sweden at the 2017 Ice Hockey World Championships.

He won the IIHF World U20 Championship with Sweden in 2012.

In December 2017, he scored a hat trick against the Toronto Maple Leafs, the first of his career and the first in Golden Knights history.

His parents were in attendance when he scored his first playoff goal for the Blue Jackets. He began dating model Emily Ferguson in 2017.

He was joined by teammate David Perron for the Golden Knights' inaugural season in 2017.

William Karlsson Is A Member Of