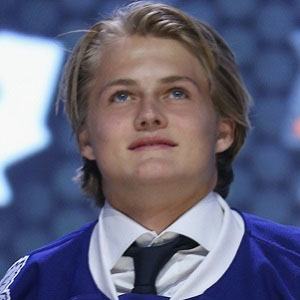 Swedish hockey center who was drafted by the Toronto Maple Leafs in the first round of the 2014 NHL Entry Draft. The previous year, he won a gold medal representing Sweden at the 2013 World U-17 Hockey Challenge.

He made his Allsvenskan debut in February of 2013 alongside his father Michael Nylander at Sodertalje SK.

He was chosen to represent Sweden at the 2017 IHF World Hockey Championship for his sixth time in his career.

He has silbings named Alexander, Michelle, Jacquline, Daniella and Stephanie.

He was drafted by a Maple Leafs team featuring fellow center Tyler Bozak in 2014.

William Nylander Is A Member Of