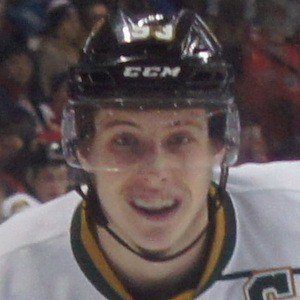 Forward who was taken fourth overall by the Toronto Maple Leafs in the 2015 NHL Draft after starring with the OHL's London Knights for two seasons.

When he was seven years old, he began playing youth hockey for the Ontario Minor Hockey Association's Clarington Toros.

He helped Team Canada win gold at the 2014 U-18 Junior World Cup tournament.

He was born in Markham, Ontario to Paul and Bonnie Marner. He has an older brother named Christopher. He began dating Steph LaChance.

He finished second in the OHL in scoring to Dylan Strome in 2015.

Mitch Marner Is A Member Of