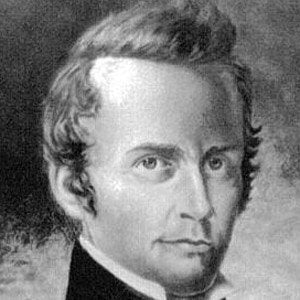 Lieutenant Colonel in the Texas Army who died a hero in the 1836 Battle of the Alamo. He also wrote a famous letter that became a plaque in front of the Alamo.

He was born in South Carolina and raised in Alabama, and he taught school, established a newspaper, and worked as an attorney before beginning his military career.

He wrote a famous letter at the start of the Battle of the Alamo that was addressed "To the People of Texas and All Americans in the World," and that announced that he would never surrender. The letter encouraged widespread American support for the Texas Revolution and established Travis' place in history as a war hero.

He married Rosanna Cato in 1828. The couple had a son and a daughter before divorcing in 1836.

He and James Bonham were both heroes of the Battle of the Alamo.

William B. Travis Is A Member Of