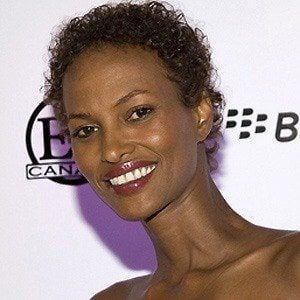 Somali-Canadian model who was featured on Italian and American Vogue covers and appeared on U.S. and UK Elle covers.

She emigrated from Somalia to Toronto, Canada at age fifteen and began her professional modeling career at age twenty-one.

She modeled for Allied Beauty Association and Sears campaigns during her first two pregnancies.

She was born into a Muslim family in Mogadishu, Somalia.

She participated in runway shows for Christian Dior, Jean Paul Gaultier, and other prominent fashion designers.

Yasmin Warsame Is A Member Of