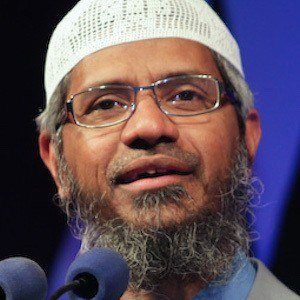 Indian doctor and speaker best known as the founder and president of the Islamic Research Foundation. He has appeared on The Indian Express' list of the 100 Most Powerful Indians.

He earned his Bachelor of Medicine and Surgery from the University of Mumbai.

He has come under heavy criticism for some of his more extreme views, such as advocating for the death penalty for homosexuals.

He married Farhat Naik. He has a son named Fariq and a daughter named Rushda.

He has been criticized by many media members for his perceived support of al-Qaeda mastermind Osama bin Laden.

Zakir Naik Is A Member Of