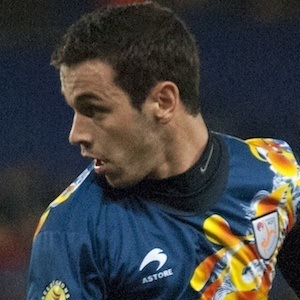 Striker who has excelled as a member of the Spanish La Liga clubs RCD Espanyol and Getafe CF. With the Spanish national team, he won the UEFA European Under-21 Championship in 2013.

He spent the majority of his childhood in Barcelona, Spain. He began playing with CF Trajana at age 5 and joined RCD Espanyol's youth squad at age 14.

He won the Silver Shoe award for his 5-goal performance in the 2011 FIFA U-20 World Cup.

His younger brother Raoul is a singer who competed on the show Operación Triunfo. His cousin is dancer Sam Vázquez.

He has played alongside centre back Naldo at RCD Espanyol.

Álvaro Vázquez Is A Member Of