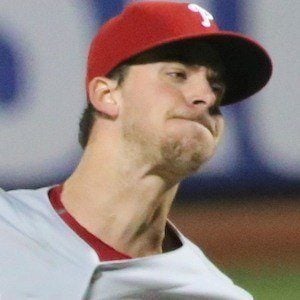 Pitcher who was drafted by the Philadelphia Phillies in the first round of the 2014 MLB Draft. He played for the United States collegiate national team during the summer of 2012. Since 2018, he has started every Opening Day game for the Phillies.

He played at Louisiana State University, where he was named SEC Pitcher of the Year.

He was originally drafted out of Catholic High School by the Toronto Blue Jays in 2011 but elected to play at LSU instead. His earned run average through the 2022 season was 3.60.

His brother Austin also played for the LSU Tigers.

He became teammates with Phillies second baseman Chase Utley in 2014.

Aaron Nola Is A Member Of