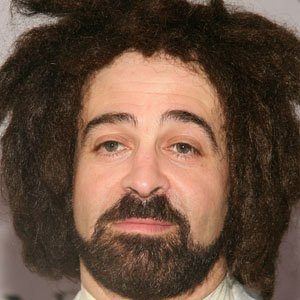 Counting Crows lead singer who had a hit with "Mr. Jones" and sang "Accidentally in Love" for the Shrek 2 soundtrack.

He attended both University of California Davis and Berkeley but graduated from neither school. Before forming the Counting Crows, Adam played in a Bay Area band "The Himalayans" until 1991.

He has been open about his diagnosis of depersonalization disorder. After the Counting Crows debut album August and Everything After became a hit, Adam took up bartending at The Viper Room, in Hollywood, which at the time was owned by Johnny Depp.

He grew up in a Jewish family and has a sister named Nicole. He had a brief relationship with actress Emmy Rossum.

He and Counting Crows have been heavily influenced by The Band, Van Morrison, Nirvana, and many others.

Adam Duritz Is A Member Of