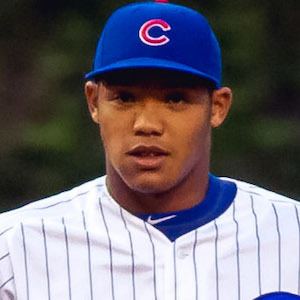 Infielder who made his MLB debut with the Chicago Cubs in 2015. The following year, he helped the Cubs win the franchise's first World Series title since 1908.

He was born in Pace, Florida and was drafted out of Pace High School by the Oakland Athletics with the eleventh overall pick in the 2012 MLB Draft. He was ranked as the third-best prospect in professional baseball by Baseball America during his time in Oakland's minor league system.

Prior to his MLB debut, he was named the CAL Rookie of the Year, a CAL postseason All-Star, an AFL Rising Star and a CAL Futures Game selection.

He has been coached by manager Joe Maddon in Chicago.

Addison Russell Is A Member Of