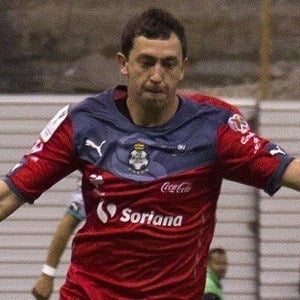 Argentinian professional soccer player who rose to fame playing the goal keeper position for both the Mexican club América, as well as, Argentina's national team. In 2012 he was the recipient of the Ubaldo Fillol Award.

In 2009, he made his professional debut in a match against Gimnasia y Esgrima de Jujuy.

In 2015, he assumed goalkeeper duties for Argentina's national team after Mariano Andújar was injured during the Copa América tournament.

He was coached by Gerardo Martino during the 2015 Copa América tournament.

Agustin Marchesin Is A Member Of