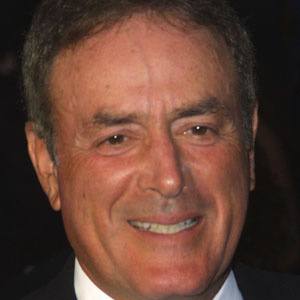 Baseball, Olympics, and Monday Night Football sportscaster; famously said 'Do You Believe In Miracles' during Team USA's historic 1980 Olympics hockey victory. He and the late John Madden worked together for 7 years calling NFL games, forming what was an iconic tandem for Monday Night Football.

His first job in the entertainment business was finding girls to be on 'The Dating Game.' Over the course of his career, he has called 11 Super Bowls. He is known for his ability to call sporting events without making mistakes.

He married Linda Anne Stamaton on August 27, 1966 and together, they had two children.

He and Dennis Miller both hosted Monday Night Football games on ABC.

Al Michaels Is A Member Of