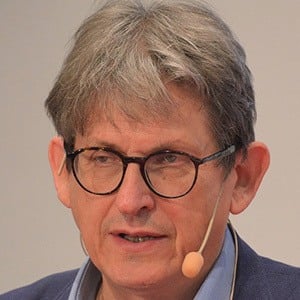 British journalist who is best recognized for having served as editor-in-chief of The Guardian during the period of Edward Snowden and Wikileaks. He is also recognized for his children's books, his work as a television critic for The Observer, and as Principal of Lady Margaret Hall at Oxford.

He attended Magdalene College, Cambridge where he studied English Literature. While attending the school, he worked for their Cambridge Evening News program as an intern. He stayed with the paper after graduating until 1979 when he was offered a position at The Guardian as a reporter.

He was one of the recipients of the Right Livelihood Award in 2014. He is also known for being a talented pianist and has performed Chopin's Ballade No. 1 for the More4 program.

He was born and raised in Lusaka, Northern Rhodesia. He married educator Lindsay Mackie in 1982 and together they founded the educational charity program FILMCLUB.

He is known for having made the decision to destroy hard drives containing information leaked to The Guardian by Edward Snowden in August of 2013.

Alan Rusbridger Is A Member Of