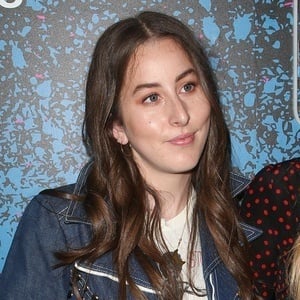 Guitarist and one of the founders of the indie rock band Haim. They went on to release their debut LP Days Are Gone in 2013, along with the album Days Are Gone.

She and her two sisters, Danielle and Este originally formed the band in 2006.

They have opened shows for The Henry Clay People, Edward Sharpe and the Magnetic Zeros, and Kesha.

She grew up into a musically-inclined household in the San Fernando Valley, where their parents played 1970s classic rock records. Their whole family started a band called Rockinhaim.

Their sound has often been compared to that of Stevie Nicks and Fleetwood Mac.

Alana Haim Is A Member Of