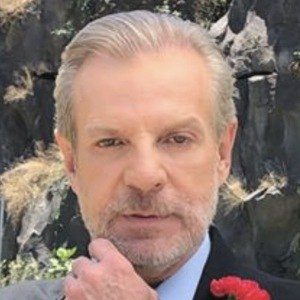 Award-winning actor who shot to stardom thanks to roles on telenovelas such as El Manantial, Corazón que miente and Alborada. He has also had notable parts in the films Sobrenatural and Por la libre. In 2018, he began starring in the telenovela Por Amar Sin Ley.

He studied piano, sol-fa, singing and music at the Conservatorio Nocturno de Música del INBA. He earned a Bachelor's degree in Dramatic Art Literature and Theatre at the UNAM Philosophy Campus. In 1978, he made his TV debut in the Televisa telenovela Bianca Vidal.

He won a 2008 TVyNovelas Award for Destilando Amor. He's acted in more than 50 movies and has played more than 300 characters throughout his career.

He was born in Mexico, but his family is of Italian descent. His great-grandfather Francesco Tommasi and his grandfather Pietro Tommasi Aliboni were distinguished Italian sculptors.

Alejandro Tommasi Is A Member Of