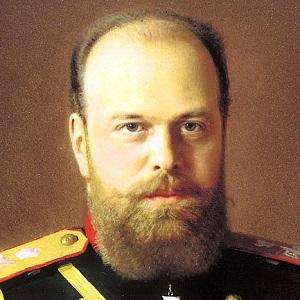 Emperor of Russia, King of Poland and Grand Prince of Finland from 1881 to 1894. He was known for being a conservative leader who went back on many of the liberal acts that his father passes as King.

He became the heir apparent to the Russian throne when his older brother Nicholas died suddenly in 1865 of spinal meningitis.

He implemented the "May Laws" in 1882, which banned Jews from inhabiting rural areas and in 1887 he signed the Reinsurance Treaty with the Germans.

He married his brother's former fiancee, Maria Feodorovna, in 1866.

The monarchy was abolished after his son's reign and was replaced with Vladimir Ilyich Lenin's communist dictatorship.

Alexander III Is A Member Of