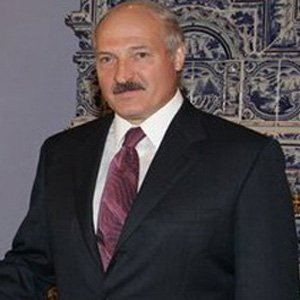 Russian politician who became the first President of Belarus of 1994. He has been criticized for his authoritarian style of government.

He served in the Soviet Army for two years.

He has been accused by international audiences of creating a dictatorship in Belarus.

He has three children, Viktor, Dmitry and Nikolay, with wife Galina Zhelnerovich.

He was President of Belarus for over eighteen years, which is twice as long as Boris Yeltsin was able to remain in Russia's Presidential office.

Alexander Lukashenko Is A Member Of