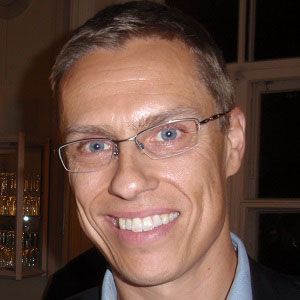 Finnish politician who was elected as the Prime Minister of Finland and leader of the National Coalition Party in 2014. He previously served as the Minister of Foreign Affairs from 2008 to 2011 and the Minister for European Affairs and Foreign Trade from 2011 to 2014.

He graduated from Mainland High School in Daytona Beach, Florida in 1986 and attended Furman University in South Carolina on a golf scholarship.

A collection of his columns for Blue Wings magazine titled The Naked Truth and Other Stories about Finns and Europeans was published in 2009.

His full name is Cai-Goran Alexander Stubb. He married Suzanne Innes and has children named Emlilie and Oliver.

He and President Sauli Niinisto are both members of the National Coalition Party.

Alexander Stubb Is A Member Of