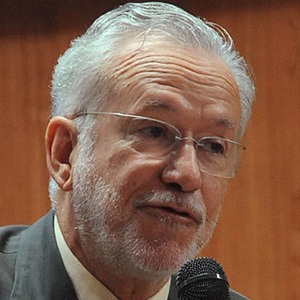 Journalist and TV host who began working at Rede Globo as a political commentator in 1988. He left in 2018. He worked as the official press secretary for President João Batista Figueiredo.

When he was 7, he was a child actor on the radio program that his father hosted. At 15 he was an announcer at Radio Independente de Lajeado. He studied Social Communication at the Pontifical Catholic University of Rio Grande do Sul.

In 1990 he authored the book Behind The Scenes of the News.

He married Magda Pereira. They have children Denise, Gustavo and Julia. His father, Chaves Garcia, was a radio host.

Alexandre Garcia Is A Member Of